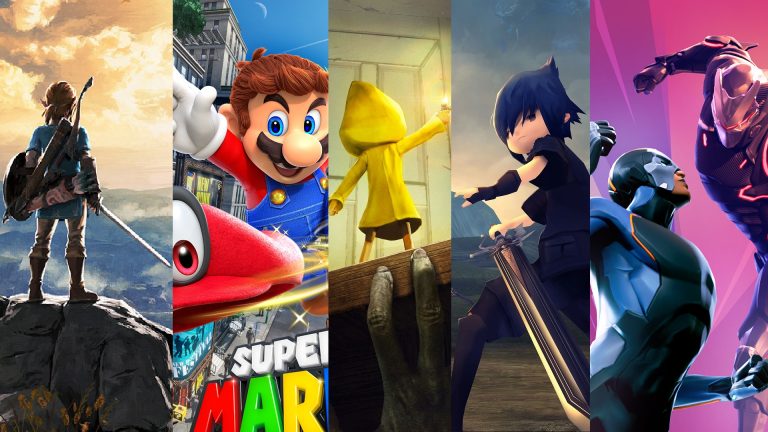 Here are the best Nintendo Switch games as of September 2018.

So seeing Vita lovers makes sense that portable gaming has its place and it is where Switch comes to fill it.

This will bring back your childhood or For new gamers this old school game can tell the difference between new games to old games.

The game is enhanced, textures and there are new levels, adventures are added.

It was originally released on Wii U in 2014 and now it is finally on Nintendo Switch.

Bayonetta 2 is really a great game, combat is great and animations are amazing, if you are a fan of Bayonetta franchise than you should purchase Bayonetta 2 physical copy so you can get original game code.

Bayonetta 3 is confirmed for Nintendo Switch and it is in Development, Date is still to be revealed.

Nintendo console without Mario game? it is not possible. The Super Mario Odyssey is a 3D adventure in it Mario travels many worlds to save Princess Peach.

Now Mario has new power called Cappy this hat is a weapon of Mario and a friend.

This is the great enjoyable game with finest adventures.

Little Nightmares was released in 2017 on PC, Consoles and then released on Nintendo Switch.

Bandai Namco is the maker of Little Nightmares It fits in the horror genre and Story, Gameplay and environment is what gives life to it.

You take control of young girl whose name is Six, She is trapped in Maw, Maw is a place with monsters.
Little Nightmares comes with great levels and often creates situations where players hold breath.

This version is based on Super Street Fighter 2 Turbo form 1994. So do not expect something new from it.
Some enhancements are done and basically this is a traditional Street Fighter game and multiplayer is perfect.

Rockstar LA Noire is game which is given new life on Nintendo Switch.

LA Noire is a detective game where you can solve variety of cases.

And It is good that Switch is getting old games like this which is great and these top level games available on Switch makes it more interesting console and enjoyable portable console.

It is a 6 years old game but it was not released on any portable console so Nintendo Switch is the first to get it and you can enjoy the Skyrim on Switch and it feels fresh when playing it on portable switch.

Breath of the Wild is absolutely a great game and In this game the entire map is open so you can approach the game any way you wish.

The Legend of Zelda: Breath of the Wild puzzles makes it absolutely unique and are most satisfying. The game feels great when you play on Switch and it is hard to not to fall in love with Zelda and Nintendo Switch.

Final Fantasy this is the fantasy of many games. If this is your fantasy than you will love it on Nintendo Switch.

It is specially developed for Switch as the game name mentions Pocket Edition, You can explore 10 chapters on this adventure on Switch.

Nintendo Switch has many great games and If a game is developed for it than you can enjoy more on it and you will love the portability as gaming means joy not high-class graphics.

Please let us know in the comments which are your best games of Nintendo Switch.